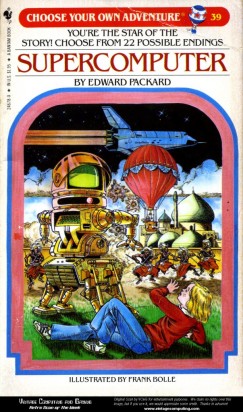 Reading is often claimed as the first victim of technology. Various contemporary causes are said to be at fault: screens are too bright to read on, ebook readers don’t smell or feel like books and social media is ever- present, threatening to disrupt our reading online. But this claim implies a reading experience that cannot be interrupted – a solitary aesthetic experience. Reading is an experience you can have even when surrounded by others, but the act is thought to have only ever occurred between you and the text.

This is, however, a depiction of reading that privileges print or quasi-print forms. For instance, a particularly engrossing novel is a ‘page turner’ that ‘you can’t put down’. On screen you can’t pick up the book and your pages (even if they act like pages) are merely visual metaphors. Added to this onscreen reading is the notion of ‘interactivity’ in text. (This differs to the concept in gaming, an area where both visual and textual interactivity are normalised).

Print had its precursor interactive texts within Oulipian experiments and the more commonly recognised Choose Your Own Adventure (CYOA) stories. Perhaps I didn’t read CYOA as intended – I am one of those readers who usually read the last page of a book first – but I would regularly hold open the possibility of competing narratives until I was safely down the path I wanted. The mechanics of my reading shifted to a skim reading until I was satisfied with the direction and I then reread the earlier sections.

‘Interactivity’ has long acted as a buzzword. It is representative of the relationship we have with the market in general and the media specifically.

Interactive thus came to signify a modern, radically improved technology, usually relating to an older one. The industrial rhetoric produced concepts such as interactive newspapers, interactive video, interactive television and even interactive houses, all implying that the role of the consumer had (or would very soon) change for the better.

A recent article, aptly titled ‘What if interactivity is the new passivity?’, suggested that ‘while interactivity can be imagined as the “like” or “retweet,” it also encompasses the “agree to terms” button’ . There is constant cajoling to ‘participate’ by clicking ‘like’ on Facebook, (re)tweeting an ‘article’ or leaving a comment. In Semblance and event, Brian Massumi paints it as the ‘tyranny of interaction’, describing the process as one where you ‘are viscerally exposed, like a prodded sea cucumber that spits its guts’.

Meanwhile, Ali Alizadeh’s Meanland post last year quoted from Žižek’s The plague of fantasies, precisely on the issues of the hype and perils of ‘interactivity’ for readers. Žižek wrote that ‘instead of just passively following the show the situation in which the object itself takes from me, deprives me of satisfaction (or mourning or laughter), so that it is the object itself which “enjoys the show”’.

This, I think, reduces ‘interactivity’ to what we do with a mouse – and so isolates it from the reading experience. There are equally inveigling methods of having people interact with forms that aren’t considered interactive, such as book signings or poetry readings.

If we shrink interactivity to tweeting, liking, sharing and commenting, we’re devaluing our activities as people, rather than elevating what are technically our writing practices. Why is ‘liking’ considered more interactive than buying a cup of coffee? ‘Liking’ is actually less interactive and more a form of distributed data entry. To win back ‘interactivity’ from commercial data entry and media hype, I’m proposing we claim it as a valid literary technique.

This isn’t meant to suggest that reading hasn’t always been an active experience. The idea that a reader’s involvement in a text is the reading process is central to reader-response theorists like Wolfgang Iser. Therefore, the choices we make when we read are part of a process essential to making sense of the text.

But what ‘interactivity’ does do is highlight the artifice of writing and the artifice of reading. Reading and writing are not natural events; they are produced through a collaboration between author and reader. By having the reader participate, it recognises that the reader was already participating. By creating interactive texts with contemporary technologies, we’re also historically linking them to the technologies that are used to produce and publish texts.

Artistic techniques and movements that were once disruptive are now easily appropriated into dominant culture. With ‘interactivity’ it happened quickly in regards to the commercial use of both the method as a buzzword and to help push sales up by posting on a company’s Facebook page. It is unfortunately a shallow interaction: if a company doesn’t like what you’re saying they’ll simply delete it (we could call that ‘commercial interactivity’).

What’s more, ‘interactivity’ expands the possibilities of literature to both draw the attention to the act of reading and to make the process uncomfortable. The discomfort does not need only come from form, however – there is plenty of writing that upsets or surprises people – all of which are ways that interrupt the romanticised reading experience.

This post was originally published on the Overland literary journal website as part of the Meanland project: Interactivity is not a dirty word.